Posted by woodsiegirl on July 16, 2018 in Uncategorized

It was a fantastic trip, if a little short! We only had one full day there: we arrived in Fuzhou on a Wednesday lunchtime, spent Thursday at the University, and flew home Friday evening. So the whole visit is a bit of a blur in my mind really!

I wanted to blog about my impressions of the library. My role in the trip was to assess the library resources and facilities, and I was really excited to see how a university library in another part of the world functions. I was really impressed by the library at FNU. In particular I think they’ve done a fantastic job of using their special collections and archives in an engaging, public-facing way.

The library itself is an impressive, modern building. We saw one of two main campus libraries – I understand that the one we were shown around was the larger of the two. Each faculty also has its own satellite library.

The entrance to the library as very wide and open, with various displays which I will talk about in more detail below.

In the entrance to the library are various displays showing some of the University’s special collections. The first we were shown was a large plasma screen with a digitised photo of the first graduating class of the University, in 1908. This was opposite a green screen, which superimposed you onto the photo in the middle of the graduating class. You could then download a copy of the photo with yourself in it by scanning a QR code. This display had been put in place to celebrate the University’s 110th anniversary.

Trying out the green screen

I really liked this idea: it was a great way of highlighting the institution’s history, and making it accessible to a wider audience. On a similar note, there was also a display of digitised PhD theses from one of the founding institutions that merged to become the FNU. The covers of these were displayed on touch screens lining the walls. if you tapped one, you could actually page through and read the full document (if you had time!). You could also scan a QR code to download a PDF of the document to your device.

You may be sensing a theme here: QR codes were absolutely everywhere! And not just in the University: when we were taken sightseeing around the local area, tourist information signs all had QR codes on them too, as did advertising posters and shop signs. I even saw people actually scanning them! That might be worth considering, for Universities with a lot of Chinese students: they are likely to be already used to scanning QR codes, so this may be a helpful way to present information.

As well as seeing the digital displays, we were also shown around some of the physical special collections. The founder of the University, Chen Baochen, was the teacher of the last Emperor. The University holds the collection of his books, which formed the basis for the first library at FNU. These books are all held in purpose-built boxes made by the founder to fit his books. I particularly liked the miniature book boxes that he had created for travelling with: sort of a 19th century version of a Kindle!

One of the miniature books in a custom-built travel box

As evidenced by the prominent digital displays in the library entrance, FNU library invests heavily in digital resources. In fact, I was surprised to discover that the library doesn’t often buy print books at all. When they showed us round the English-language print collection (the degree course is going to be delivered in English, so we needed to make sure the library resources were sufficient to support this), the books on the shelves were all very old: mostly 20+ years old at the least, from what I saw.

Our guides explained that their students are heavy eBook users, so print stock tends to go unused. I asked what they would do if a core text was unavailable in e-copy (I have been checking the reading lists for the course to be delivered in China and am aware that a significant proportion of the recommended books aren’t available electronically). The response was that they would get hold of books on request through their inter-library loans service.

This seemed really odd to me, as I can’t see how using ILLs to provide required course reading could possibly be sustainable. I was also unclear from the conversation whether the digital-only strategy was for all books, or only the English language collection. I did see students working in the library with Chinese-language books which looked newer, although I couldn’t tell if these were current versions or just in better condition, or if they were the students’ own copies that they’d bought themselves.

The provision of ebooks was excellent though, so clearly the lack of print books wasn’t considered an issue! There was also a lovely interactive ebook display in the library entrance, referred to as a “book waterfall”. This was three freestanding pillars with touch screens on them, each had ebook covers cascading down them like a waterfall. You could tap on one to stop it, and scan a QR code (again!) to open it on your device. It looked fantastic, and the two (very senior!) members of Huddersfield staff I was visiting with were equally impressed – so much so that I wonder if we might be asked to do something similar in our library! 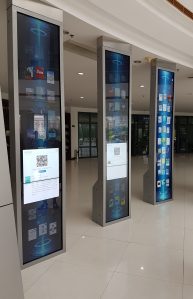 I wasn’t clear how access was managed for this: when I asked I was told that only university staff and students would be able to open an ebook, but when demonstrated it seemed like the ebook opened up instantly, so I’m not sure how they’d have prevented non-users from doing this. I could see that being a concern for our ebook vendors if we were to try something similar.

It’s possible some sort of authentication was set up in the apps they were using. They used WeChat to scan their QR codes, so I wondered if there was a way of recognising registered users via this app. The library had a WeChat account that they used to communicate with users, and had created their own WeChat app, which looked fantastic. WeChat, if you’re unaware (I was!) is the most heavily used social media app in China. It’s a combination social media, messaging, and mobile payments app.

The library uses it to post messages, take comments and suggestions from users, and the app appeared to connect with their library catalogue so you could search for ebooks without leaving WeChat. WeChat also has a built-in QR code scanner, which it has been suggested is one possible factor in the continuing popularity of QR codes in China! It looked a really useful app, and it made me wonder if we ought to consider setting up a WeChat account for our library, to connect with our Chinese students.

Despite the digital-first strategy, the physical library space was still very important. Before the trip, I asked on the SLA (Special Libraries Association) forums for anyone with experience of Chinese HE libraries to get in touch with any insight as to what to expect. One of the things I was told was that libraries in Chinese universities are seen primarily as places to work and study. One person said she remembered from her own undergraduate in a Chinese library that competition for library workspaces was always fierce!

I noticed when looking around that it certainly seemed to be busy. There was seating in pretty much every area of the library we visited, and it was probably about 50% full from what I saw. Given that we visited in mid-June, after the main exam period, that seemed like quite high usage for the time of year.

The study spaces we saw were all individual, silent-study spaces. We were told that there were bookable group study rooms available, although we didn’t see these. I have heard from Chinese students here that they tended not to do group work in their home colleges and universities, so it makes sense that individual study was the main use of FNU library. It occurred to me then that our library at Huddersfield, which has silent study spaces but is mostly set up for quiet conversation or group working, must come as a bit of a shock to our Chinese students if they are used to working individually in silent libraries.

There were a few more social spaces in the library, although I didn’t see many people using them at the time we visited. For example, there was a nice seating area to browse print magazines, journals and newspapers. It had comfy seating as well as a few desks around the sides. I’d love something like this in our library – we’re always being asked for comfy seating areas!

Seating in the journal browsing area

Finally, one of my favourite things I noticed when we went around was this book steriliser. Anyone who works in a library knows that books can get pretty gross – paper absorbs everything, and I can’t be the only one who wonders about the germs from everyone who’s handled a popular library book! The book sterliser was available in the library foyer, next to the self-issue and return machines. It looked a bit like a small fridge, just with a rack inside that you could put a few books on. When you closed the door and set it going, you could see the pages being riffled through, and light shining on them – I think it used UV light to kill germs. Then after about a minute you could take your books out, freshly cleaned. They even smelled nice! 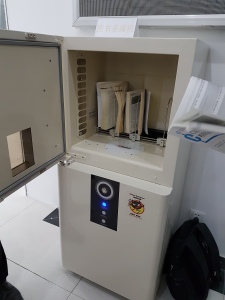 Despite it being a real whistle-stop tour, I really enjoyed the visit. It was a fantastic opportunity to visit a part of the world I’d never seen before, and learn a bit about the experiences of Chinese students in their own universities. We have a lot of Chinese students at Huddersfield, so it’s good to know a bit more about what their expectations of a library service might be.

I’m glad I did a bit of research before I went, which gave me a bit of an idea of what to look out for. I’m really grateful to all the people from SLA who responded to my forum post and shared their recollections and experience of HE and librarianship in China.

I also did manage to do a little sightseeing while I was there, even though it was such a short trip! Our hosts kindly took us out to see some of the local area on the day before and day after the validation visit. My photos are all on Instagram (part one and part two), if you are interested!

← Reflections from LILAC 2018
Critical Approaches to Libraries Conference, May 2020 →