Posted by woodsiegirl on October 7, 2017 in Uncategorized

This week on my PGCHE, we covered teaching large groups. This is one of the sessions I was most looking forward to, as pretty much all of my library teaching is to large groups, mostly in lecture theatres. In fact the usual definition of “large groups” for teaching is anything over 30, so given that most of my library lectures are to anything from 100-250 students at a time, that does mean a significant shift in teaching strategy!

I’ll be honest: I do not like lectures. I didn’t enjoy them as a student, and I don’t enjoy delivering them as a teacher. Particularly as a teacher-librarian, I find having to come in to do one guest lecture, in which I am expected to impart high-level skills in information literacy and critical thinking, a nearly impossible task. So I was hoping to get some strategies from this class that could help me cope with this.

We started off by discussing what the advantages and disadvantages of lectures were, from the point of view of the teacher, student, and the university. I found this a useful place to start as I’m very used to considering the negatives of the lecture format, so it was good to have a nudge to think about what the actual benefits would be! After all, lectures wouldn’t have endured as the dominant form of teaching in HE for so long if there were literally no benefits…

The main benefit, of course, is from the University’s point of view: they are cheaper. Economies of scale are at work: it is cheaper and easier to have a teacher deliver one lecture to 200 students, than to have them teach ten classes of 20 students. For that reason alone, lectures will never go away, so we do need to find ways to do them well.

Other advantages for teachers included less prep work (planning one lecture rather than lots of classes), and consistency of delivery (you can assume all students have been given the same information, allowing you to build on this). Advantages for learners included that same consistency, plus an opportunity for less confident students to “hide” – not everyone likes being made to participate in an active class! Although of course this is as much a disadvantage as an advantage.

I feel like I hardly need to list the disadvantages, but for the sake of completeness: lack of opportunity for engagement and active learning, lack of application of knowledge to develop higher order skills, challenging and disruptive behaviour from bored students. Plus of course, potentially lower pass rates and NSS scores from underachieving and disengaged students – leading to all kinds of negative impacts on the university as a whole!

Essentially, the traditional lecture is a passive way of learning. My problem with this is neatly illustrated by this well-known quote (usually mis-attributed to Benjamin Franklin, but apparently derived from the writings of the Chinese Confucian philosopher Xunzi): 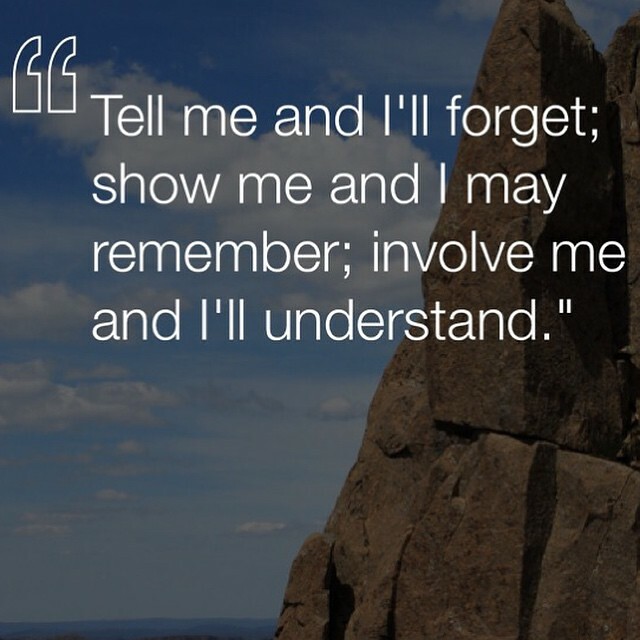 “Tell me and I’ll forget; show me and I may remember; involve me and I’ll understand” – from Zaneology on Flickr, shared under CC BY 2.0 https://flic.kr/p/uSTGXC

Our instructor, Wayne, was keen to stress throughout that he is not anti-lecture per se. He is, rather, anti-didactic lectures, where the teacher simply stands at the front and talks at the students, flinging knowledge towards them which it is their responsibility to catch. So, we spent the rest of the session discussing ways to incorporate active learning into large group lectures.

A lot of the techniques we discussed were things I already do in my own practice: which was reassuring in some ways, but also a little frustrating. I think that, although I know there isn’t a simple answer to this, deep down I’m still hoping there’s just a trick I haven’t learned yet that will unlock it all for me!

Some of the techniques were things that wouldn’t work for me at all, as they were about developing a relationship with the group over time. For example, the first time Wayne sees a new group, he spends the first 15-20 minutes of the lecture getting them to come up with a list of their rights as learners, and then getting them to come up with a corresponding responsibility. He then makes a laminated copy of this list, and refers to it throughout the year wherever there is disruptive or disrespectful behaviour from the group.

I love that idea, but I only see each group once a year (and sometimes not even that!) so I don’t have that opportunity. I talked to Wayne about this, and asked if he thought there was a way to do this in a one-off session. He suggested I might be able to do a really short version of this, to set expectations at the start. For example, when he does guest lectures, he states at the start what his expectations are of the group, and what he will deliver in return. I would like to try doing this, so I’m going to have a look for examples of the kinds of wording I could use to set learner rights and responsibilities in a one-off session.

My conversation with Wayne was probably one of the most useful things from this session actually, if only for acknowledging that I’ve got a really hard job to do and there are no easy answers to it! He actually said straight off that doing only one-off lectures, where you’re “parachuted in” to an established cohort, is the hardest way to lecture. He also said that in his experience, Engineers and Computer Scientists (the School I support…) are the hardest groups to engage in this way, which was again both reassuring and disheartening! Reassuring because at least it’s an acknowledgement that it isn’t my fault, it is just that difficult… Disheartening because it suggests that however hard I work, it’s not going to get much easier!

A couple of bits of advice he gave me were to make use of the course lecturers when it came to managing behaviour in my lectures. He said that if he’d invited in a guest speaker to a lecture and the class weren’t engaging with it, he would be addressing that with them, so I should be able to expect that of any class I am going in to. I pointed out that the lecturers almost never stay in the classes I’m teaching, so he said that I really should be insisting that they do, or asking why not.

I guess I’ve never really had the confidence to do that before, but it does make a massive difference to my lectures when their usual lecturer is in the room. When it’s just me alone, the students will act out in ways I’m certain they wouldn’t if their usual lecturer was there. So, I guess I’m going to have to bite the bullet and start asking a bit more of the lecturers I work with!

Other than the general validation of knowing that others agree that the one-off lecture format is bloody difficult, I also picked up some useful tips and techniques from this class that I am going to try in my lectures. One was about structuring a lecture: I’ve always tried to break up my lectures, either with activities or videos, so I’m not just talking solidly for 50 minutes, but I hadn’t really thought about how to structure the lecture around that. I just try to introduce an activity whenever there’s a natural break in the topics I am talking about.

Wayne’s suggestion was to have an activity, a pause, or a change in teaching style (he calls these “reset buttons”) at set points throughout the lecture. In a standard 50 minute lecture, he suggests a reset button after 20 minutes, then after another 15 minutes, then at the end as a sum-up. I’ve had a look back at some of my previous lesson plans with this in mind, and that seems to be the rough format I’ve been instinctively following most of the time, but I will try to formalise this more!

We talked about various strategies for “reset buttons” that we could try out, some of which I’d used before, and some which were new to me. One I particularly liked, that I can definitely think of a few upcoming classes it would help with, is a mini reporting back activity. To get students to engage with the notes they’ve been taking, 20 minutes into the lecture, ask them to turn their notes over and spend two minutes noting down two key points from what you’ve told them so far. Then pick 3-6 people (depending on how much time you have) to report back. It’s a very quick activity to do, but effective in making sure people are paying attention, and checking what they’ve understood so far.

All in all, this was a valuable session for me. Although I think it’s raised more questions than answers, it has given me a few ideas of strategies I could try, as well as a bit of reassurance that it isn’t just me being rubbish – it actually is that hard!