Posted by woodsiegirl on May 19, 2015 in Uncategorized

Looking back on my post in January at my plans for learning and development this year, I’m pleased to say that, although I haven’t kept up the rate of blogging I perhaps ambitiously planned, I am well underway with so many development opportunities I will definitely have a full blog by the end of the year! I thought it would be useful, for my own purposes as much as anything else, to note a quick (almost) mid-year round-up here of what I’ve done so far and what I’m planning to do.

I’ve done lots of CPD so far this year, but am way behind on writing up and reflecting on what I’ve done, so I’m also intending this post to be a bit of a prompt to get on with the writing side…

So that’s more or less it! It’s looking like a busy but interesting summer for me 🙂 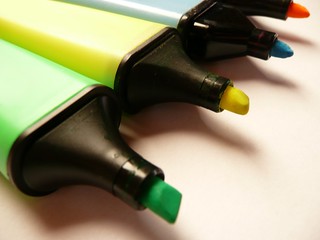 Close up / Macro of four felt-tip-pencils in green, yellow, blue and orange by photosteve101, on Flickr